Just added to your cart

What Is Sea Moss? 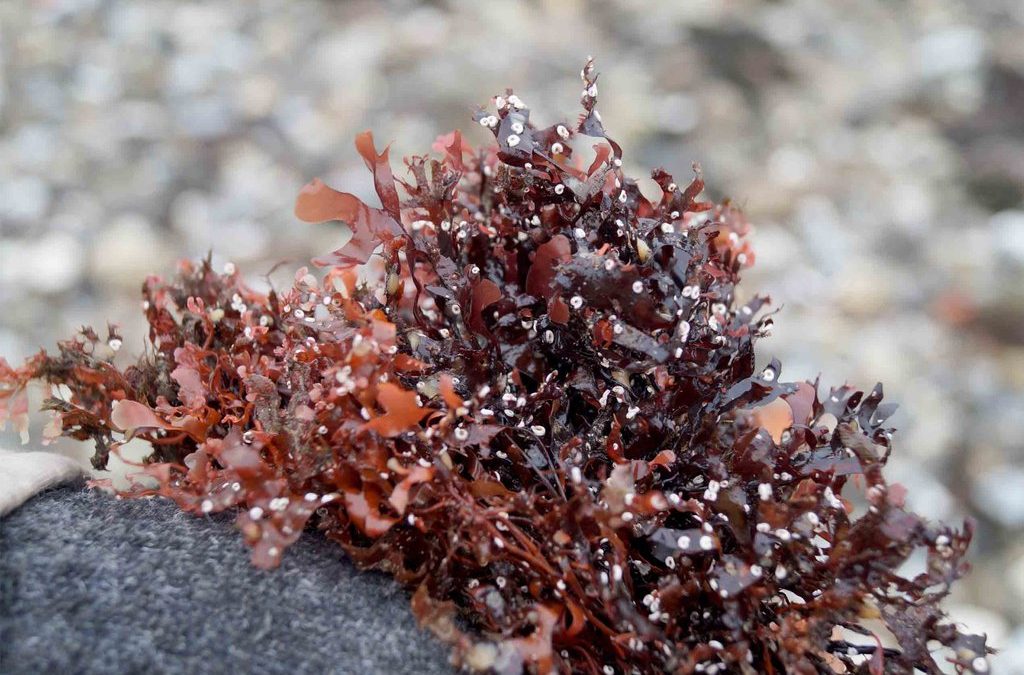 Sea moss, sometimes known as Irish Sea Moss, as it was originally known from there, botanically called Chondrus Crispus, is actually not a moss, but belongs to a species of red algae which grows in abundance along the Atlantic coast of Europe and in the Caribbean. It varies in colour from yellow to green, red and even purple. The polysaccharide carrageenan constitutes about 55% of its dried weight. It contains protein, mineral matter and is especially rich in iron and sulfur. Because of its polysaccharides content, it forms a gel when boiled, and contains 20 to 100 times its weight in water. It has been collected by hand in small boats for centuries. It was used as a poverty food during the Great Irish Potato Famine between 1846-1849, and was one of the plants that kept many from starvation and performs a similar function for people in the West Indies today. Its uses in Ireland have been recorded as far back as 1810. It was used as a cold remedy and a treatment for tuberculosis and pneumonia. It has been largely ignored in the West since then, although is common in Chinese and Japanese traditional medicine, and has only recently been rediscovered as a healing and exciting superfood.

The nutritional value of Irish moss is very impressive. It contains 15 of the 18 essential elements that comprise the human body. Irish moss has the highest nutritional profile amongst all seaweeds. It has high levels of iodine, sulfur, calcium and potassium. It is also full of vitamins such as vitamin A, D, E, F and K. It also contains protein, beta carotene, B vitamins, pectin and vitamin C. This is why it was considered beneficial in the treatment of conditions and illnesses, and renowned for its immune-boosting effect. It was used to treat digestive disorders, swollen joints, tumours and ulcers. It has some great anti-viral properties, and recent studies have shown that it can fight Influenza B and mumps viruses.

This link shows the breakdown of a particular batch examined by the US FDA. It should be stated that every source varies considerably due to the particular conditions it is grown in.

Probably one of the most important and undervalued benefits of this sea moss is its ability to help balance thyroid hormones. The moss contains DIT, which is the thyroid hormone precursor, as well as T3 and T4 hormones. Irish moss is very high in iodine, and is therefore essential for a healthy thyroid gland. The selenium in the moss is also vital as it helps to produce thyroid hormones. Iodine and selenium help to boost the metabolism, which in return increases energy levels. If you suffer from any thyroid dysfunction, Irish moss is your new best friend.

Irish moss has a long history of medicinal use, and has been used to treat respiratory problems, especially bronchitis and pneumonia. The potassium chloride in the moss has a soothing effect on tissues. It clears the lungs. It also dissolves catarrh, phlegm and soothes the inflammation to prevent congestion. The use of moss is very helpful with even a simple cold. The antiviral properties help to treat sore throats, coughs and flu.

The high fibre content in the moss soothes inflamed tissues within the intestinal tract. Its gelatin-like property provides relief from various intestinal disorders such as nausea, indigestion and heart burn. Irish moss has a mild laxative effect, helps the absorption of nutrients and encourages the digestion of proteins. A daily dose of 50mg also seems to protect against stomach ulcers.

This sea moss might also be a good weight loss agent. It reduces the appetite, thanks to its ability to absorb moisture in the intestines. This bulks up the content, which creates a feeling of fullness. It is also helps to eliminate waste.

One of the minerals vastly present in the Irish moss is potassium. Its deficiency can lead to mood disorders, and the consumption of the moss can therefore boost mental health and relieve many symptoms associated with mood disorders, such as anger, anxiety, depression and fibromyalgia.

High amounts of vitamin K could be very beneficial in treating different skin conditions, such as varicose veins, eczema and psoriasis. As you get older, your skin starts to lose its elasticity. Vitamin K is an excellent tool to prevent this as well as to slow sagging of the skin. It can also help improve the appearance of wrinkles and dark under-eye circles.

Consuming Irish sea moss could be especially helpful in treating oral cancer by slowing the growth of the cancer cells. This has been proven by various studies that have been conducted. The cancer-fighting potential present in the algae was first studied on humans and published in Nutrition and Cancer publication. It has also been shown to have an amazing radio-protective effect, as it helps to detox the body of radiation, heavy metals and pollutants.

Irish moss is packed with phytosterols. These compounds have been proven to reduce the LDL, which is the bad cholesterol in humans.The dietary intake of the algae improves blood lipid profiles as well, and also reduces inflammation and oxidative stress.

It acts as a potent anti-inflammatory agent due to Omega-3 fatty acids and chlorophyll content. These compounds provides natural pain relief. It contains plant sterols, fibres, GLA and carotenoids that help protect against non-alcoholic fatty liver disease and may prevent future heart and liver problem.

Irish moss is a perfect addition to any diet, but is particularly beneficial to those who follow plant-based eating plans. Sea moss is very rich in Taurine, a sulfur which contains amino-acids that are beneficial to non-meat eaters. Instead of using gelatin, which is a collagen of animal origin, use a better and a healthier alternative in the form of sea moss. The carrageenan from the moss can be used to make various vegan foods. However, the carrageenan in the ready-made and purchased products is already processed, so it is recommended to use fresh or partly dried sea moss for these purposes. It is therefore important not to mistake Irish moss carrageenan and carrageenan extract. The extract is chemically treated and diminished of all nutrients. This has been proven to have negative health side effects on insulin and liver. In the USA, this extract was removed from the list of substances allowed in the organic food in November 2018. It is advisable to research on the product you are purchasing, to know, which carrageenan has been used in it.